In this post, I explore the prospects of Epsom Derby favourite Pinatubo and the hopes of other leading Derby contenders staying the 12 furlong trip of the Epsom Derby.

Not a typical year, but there is still plenty of talk and debate on the prospects of the main contenders’ suitability to the Derby distance. Of those who have raced, none has as yet tackled the 1 ½ mile trip so its speculation as to whether they’ll prove as effective, not as good or even improve for the test of stamina.

While there is an element of the unknown, a look at the horses’ pedigrees can give clues to the likely stamina they have inherited.

I’ll review the favourite Pinatubo’s chance and highlight several horses who have the ideal pedigree, some who I believe offer a little value at the current prices.

I’m going to use the dosage profiles of all the Derby winners since 2000 as the benchmark.

The average dosage profile of the Derby winners since the turn of the century is 1.04 with a centre of distribution of 0.10.

I’m going to start with the average dosage profile of past winners and consider this year’s contenders who are clustered around this value.

The Aidan O’Brien pair Mogul and Innisfree are interesting Derby prospects. There are obvious similarities that can be drawn between the pair. Both are by super sire Galileo, both raced 4 times as 2-year-olds at up to 1 mile and both ran in their final outing of last season in the rearranged Racing Post Trophy at Newcastle behind Kameko.

There was little to separate them at Newcastle. On what they’ve achieved so far on the racetrack it would be very hard to confidently choose between the pair. By Galileo and raced at a maximum of 1 mile to date, both are going to be well suited to 12 furlongs.

Shastye is the dam of Mogul, she has achieved great success as a broodmare, listing Japan, Sir Issac Newton and Secret Gesture as 3 of her offspring. Mogul is certainly bred to be very talented.

As Mogul and Innisfree step up in trip, it will be interesting to see if the extra distance separates the pair’s proximity on the racecourse?

At present, the betting market favours Mogul at 12/1, Innisfree is available at 25/1.

Connections will have a lot more information on comparisons between the pair than I do. I’m forming an opinion on 4 racecourse appearances and a pedigree. I’d suggest on publicly available info the gap between the pair in the betting market is too wide, and Innisfree is overpriced at 25/1 comparative to his stablemate.

Another 2 horses who sit close to the dosage profile averages are Highest Ground and Al Suhail. I’m a fan of both and have included them in my flat horses to follow 2020.

Both look poised to step up their performances once given the chance to race over 12 furlongs. Highest Ground more so, but only because he was limited to just one run last season and the form he showed is some way off what is needed to be a contender on Derby Day.

Al Suhail has given us more evidence, having raced 4 times as a 2-year-old. The latest over a mile when he put up a very good effort on the clock at Newmarket. On breeding he looks set to be suited by 12 furlongs, if you watch the Newmarket race back, his run style promises the same.

I do feel Al Suhail is a little in the shadow of his stablemate Military March who narrowly beat him at Newmarket. Not to take anything away from Military March, in my opinion he’s a top-class middle-distance horse in the making and a serious Derby contender too, but Al Suhail at 33/1 for the Derby is one of the more attractive prices at present.

Sir Michael Stoute’s Highest Ground was all promise on his sole run at Leicester last season and it wasn’t missed by many. 12 furlongs is going to be no problem for him on pedigree. I wonder if he may be more a St Leger type, he looked very backward on debut and like a horse who would benefit from being given plenty of time.

Sir Michael is not averse to this approach and with the potential of a 2020 Derby in this coronavirus hit season being run without any trial races, I wonder if it may not all come a bit too soon for Highest Ground?

On the thought of the possibility of horses going straight to the Derby without any trial races this season, will it favour the horses with greater racecourse experience?

I could certainly see a horse like Highest Ground being compromised by lack of racing know-how in the hustle of a big race.

Epsom Derby contenders with an abundance of stamina

Those horse’s above Mogul in the table have real staying pedigrees, a DI of 0.75 or less and all with a negative centre of distribution.

The dosage profiles of this group suggest 12 furlongs will be no problem for them but they could well be suited by further still and be found out by speedier types over the Derby trip.

I have my eye on this group as potential St Leger prospects. A long way off, but a starting pool to watch for individual progression once we get some racing.

Will Pinatubo stay the Derby distance?

It seems every year there is debate around at least one horse as to whether it will ‘stay’ the Derby trip. This year it is Pinatubo.

I’ve ‘bracketed’ the word stay in the sentence above, rather than use the word stay, all horses will stay a trip, eventually. Rewrite with will Pinatubo be able to produce his best at the 12 furlong trip?

Looking at the information I have, a dosage index of 1.45 and a centre of distribution of 0.18 is higher than the average Derby winner this century.

There are horses with higher dosage profiles that have won the Derby since 2000, 4 horses to be exact – Sinndar, North Light, Sea The Stars and Golden Horn. Pinatubo’s dosage profile is above the average winner, but I couldn’t entirely rule him out on dosage alone. That said, his profile fits more with a horse who is likely to prove at his best short of the Derby trip.

Last season Pinatubo raced over 6 and 7 furlongs, so we are stepping into the unknown when trying to estimate his ability to prove as effective at 12 furlongs. Of course, he may not need to be ‘as good’, his natural ability and superiority over rivals could see him successful.

From what he achieved as a 2-year-old, we know he has a lot of inherent speed. Watching his races he didn’t particularly appeal as the type crying out for a test of stamina.

Then there’s the matter of has he ‘trained on’?

It’s like the physically advanced kid at school, the one with the stubble and tache who is faster than all the other kids because of his physical maturity. Race again 3 years later when all the other kids have caught up and he disappears into the pack.

The average 2-year-old will improve over 20 lbs in the time since Pinatubo last saw the racecourse and when we are likely to see him again. Was he a freak last year physically ahead of the pack, or will he have made an average improvement since his last run?

Impossible to say until we see him perform on the racecourse, if it’s the latter then we are going to see something really special.

Will Pinatubo be tried at 12 furlongs?

I’ve gone slightly off-track from the question originally posed, will Pinatubo stay the Derby distance? It’s a tough call on the information in the public domain. My instinct says that he’ll probably turn out to prove best at short of 12 furlongs, a mile no problem, the 10 furlongs of an Eclipse could prove his optimum.

I think there is a question to be posed as to whether we ever actually see him tackle 12 furlongs?

Aside from Pinatubo, Godolphin looks to have a really strong hand with not least Military March and Al Suhail for the Derby, will they even risk Pinatubo into the unknown.

I can see him being dominant over 1 mile to 10 furlongs and never being asked to try and win a Derby.

This millennium, the horse with the highest dosage profile to have prevailed at Epsom is Sea The Stars.

Looking at this year’s Derby entries who have higher dosage profiles than Sea The Stars  a couple are worth a mention as they sit fairly prominently in the current ante-post Derby betting.

The Andrew Balding trained Kameko is the current 3rd favourite. Looking at racecourse evidence you can understand this position. Winner of the rearranged Racing Post Trophy over 1 mile last season, the race is traditionally a good stepping stone to the following year’s Derby.

By Kittens Joy and American miler Sweeter Still, it produces a dosage profile that raises some concerns about his likelihood to prove as effective over 12 furlongs. Enough for me to be against Kameko at the current best priced 14/1.

Another fairly prominent in the ante-post betting is the John Gosden trained Palace Pier. I like the horse, he looks a top-class prospect, but over 1 mile.

It’s going to require a leap into the darkness to be backing him to be a 12 furlong horse on pedigree. Currently a best-priced 25/1 with the bookmakers (really?) and I want to be a layer at that price. 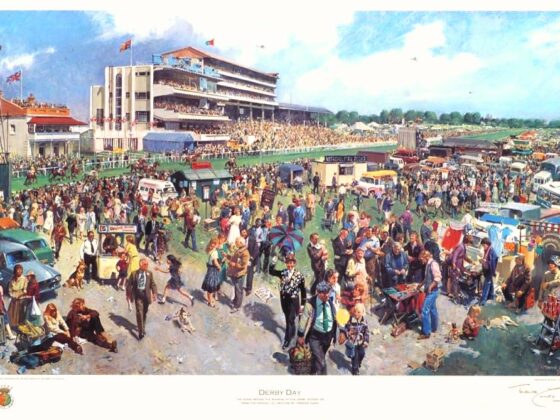