Sectional Times & The Impact On A Race Outcome

Night Narcissus is an interesting runner tomorrow in the 5-furlong 3-year-old handicap at Nottingham. Not so much as a betting proposition, more a case of how the application of pace throughout the race is a big factor in a race outcome.

On his latest run at Kempton over 6 furlongs, Night Narcissus got caught up in a furious early pace battle with 2 other runners, Nortonthorpe Boy & Obtuse.

The Racing Post standard time for 6 furlongs on the all-weather at Kempton is 70.30 seconds, broken down into a per furlong time of 11.72 seconds.

The sectional times for the 5 runners that day are in the table below. 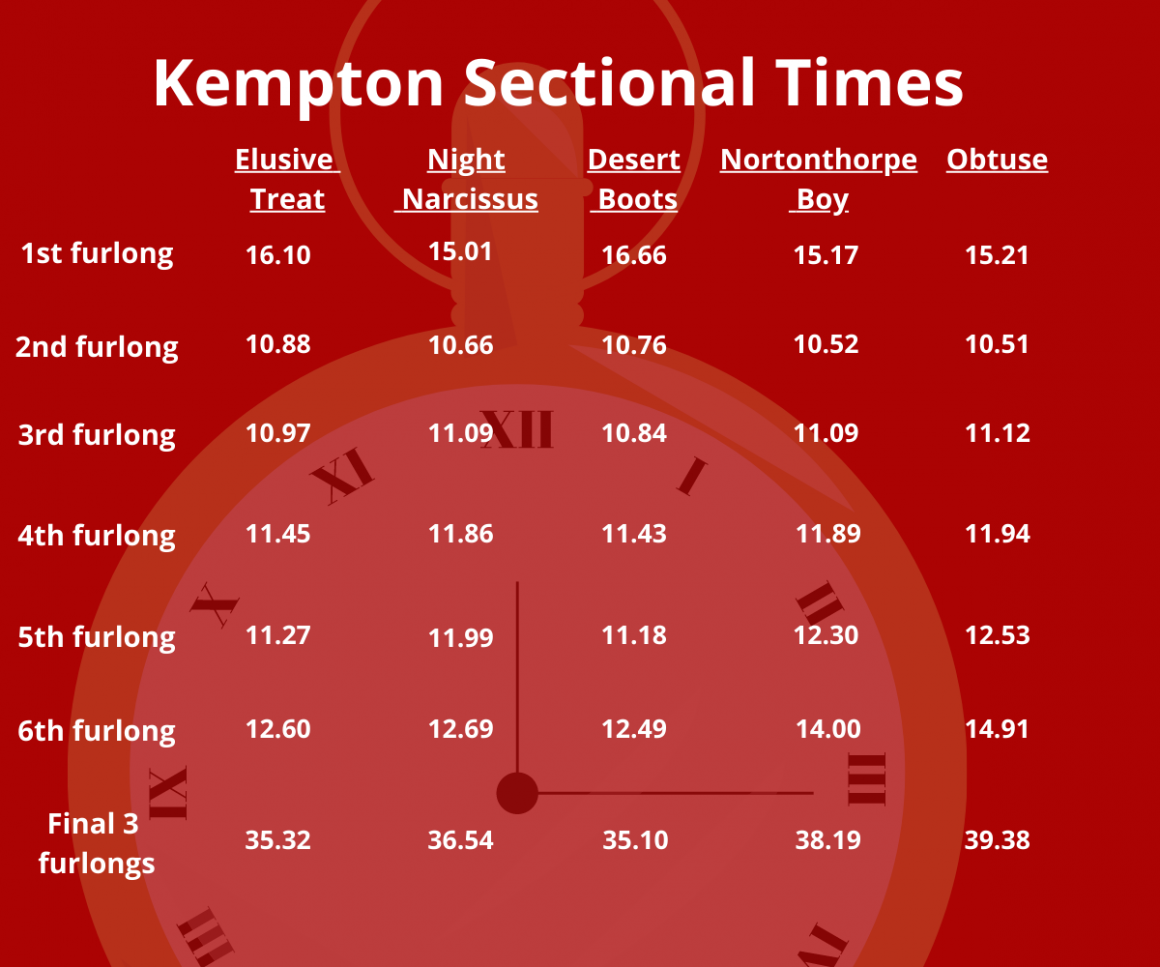 Even accounting for the ‘from a standing start’ first furlong, it’s clear that the Night Narcissus, Nortonthorpe Boy & Obtuse went off too quickly.

Overexertion of energy in any part of a race will be counterbalanced at some other part of a race, with runners who have overspent energy slowing. An even use of energy throughout a race is most efficient and produces a horse’s best overall performance against the clock.

It’s no surprise that the Kempton race was set up for the 2 horses who set more efficient fractions early in the race. Elusive Treat and Desert Boots were both held up and finished the race much stronger than the 3 front runners.

What is interesting, is the final 3-furlong time for Night Narcissus which held up remarkably well, clocking in at 36.54 seconds. Considering the energy he spent in the first part of the race and then in comparison to his fellow front runners it points to underlying ability. Should he race more conservatively in the early part of the race then he could prove a sprinter of some talent.

The Nottingham race is interesting, firstly because Night Narcissus steps back to 5 furlongs, a lesser distance. With more emphasis on speed and less on the ability to sustain, it should suit.

Will Night Narcissus be challenged for the lead? There are plenty of past front runners and pace pressers in the line-up and he’s unlikely to get an uncontested lead. If the leaders clock sub-11-second sectionals in the first part of the race, as was the case at Kempton, then they won’t last home and the race will be set up for a closer.

Going back 2 runs to Night Narcissus’s Wolverhampton win, he got an uncontested lead and looked tractable. At Kempton, he was ridden by an inexperienced 7 lb claimer who possibly got caught up in trying to dominate and misjudged the early fractions. Adam Kirby, tomorrow’s jockey, will know Night Narcissus went too fast too early at Kempton and I’d expect him to deliver more efficient fractions.

However the Nottingham race pans out, it highlights as a variable how important, yet decidedly difficult assessing the pace of a race can be, as well as how influential pace is on the result.