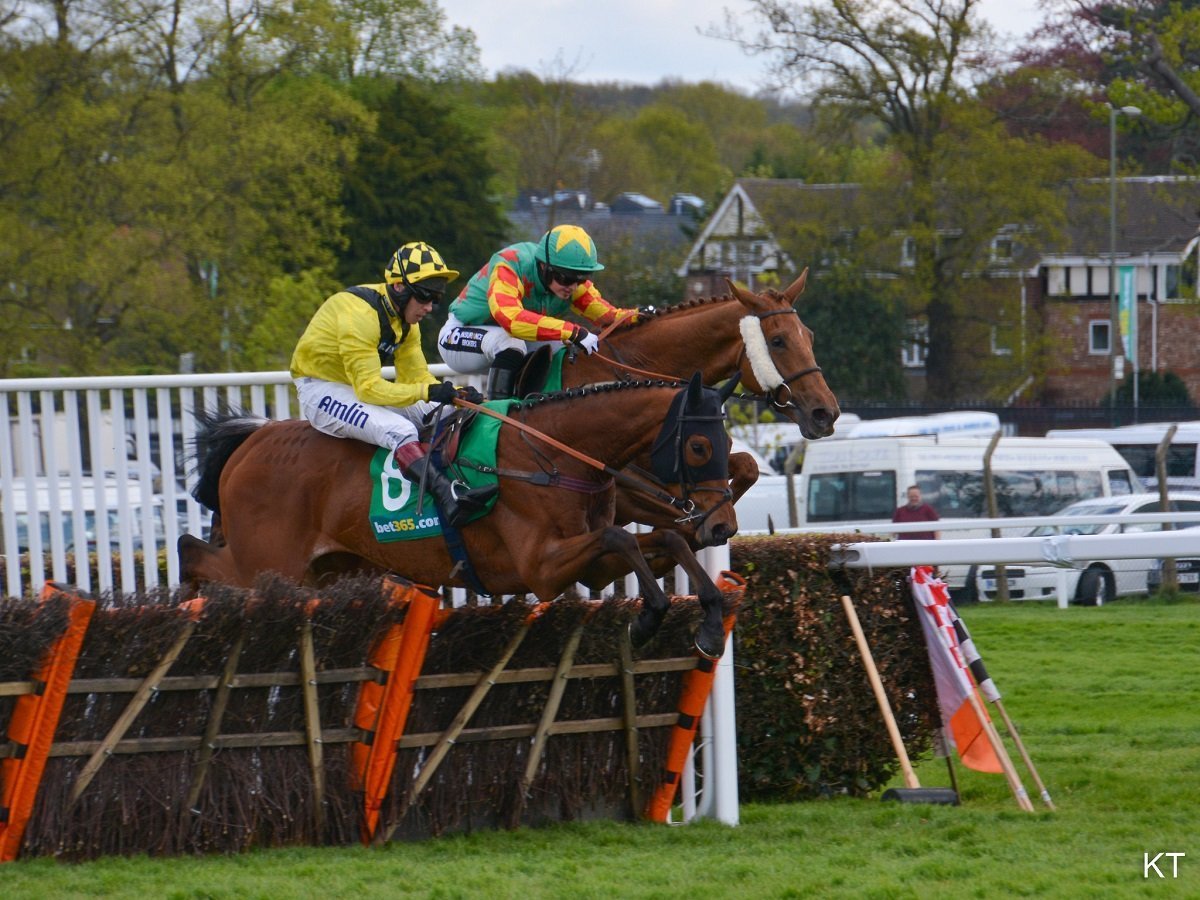 The variety of horse racing headgear used in the UK can be confusing.

In this post I’ll explain all the different types of headgear, some of the subtle differences and the purpose of deploying headgear on racehorses.

Why is headgear used on racehorses?

The ultimate purpose of headgear on a racehorse is to try and make the horse run faster and give it a greater chance of winning a race.

Different types of headgear attempt to achieve this in different ways. Some are used to calm and relax horses pre and during a race and not allow the horse to overexert and waste energy. Other apparatus is used to focus a racehorse on its job.

Horses are pack animals in the wild, the thoroughbred racehorse has been bred for racing, an opposite behaviour to racing within a pack. Some headgear limits side and rear vision and encourages the horse to focus on racing. 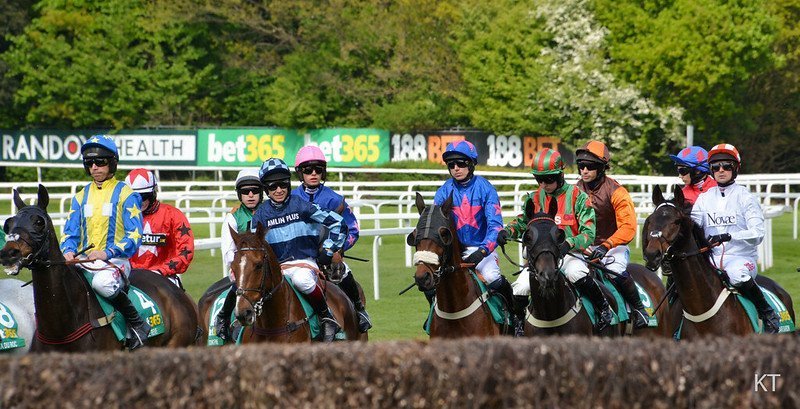 Blinkers are worn over a horse’s head with holes for both the eyes and ears. Eye holes are fitted with cups that stop any peripheral and rear vision but allow the horse to see forward.

They are used on horses to try and get them to focus and concentrate on racing and not be distracted by what is happening to the side or rear.

Very similar to blinkers in appearance other than they have slits cut into the eye-cups allowing a horse partial peripheral vision.

A hood is a piece of headgear similar to blinkers but has ear covers and no eye-cups. The hood is designed to reduce noise and distraction for the horse and similar to earplugs, a hood is used on nervous or highly strung horses. 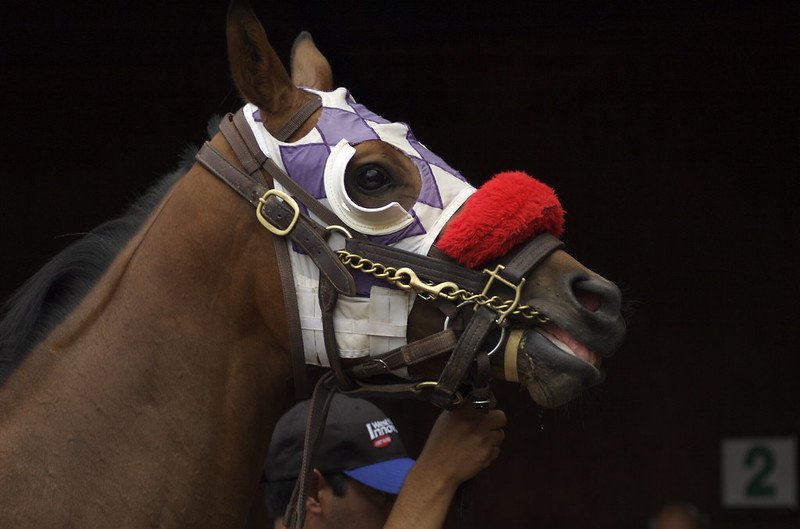 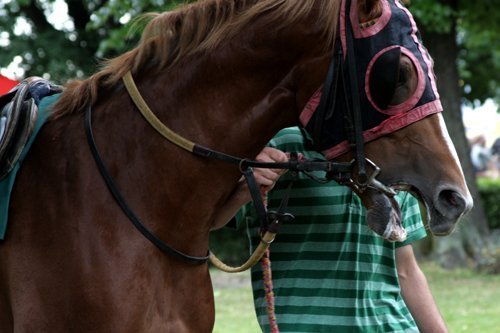 “Emerald” flickr photo by anvisuals https://flickr.com/photos/anvisuals/5849755594 shared under a Creative Commons (BY) license

Cheek pieces or french blinkers as they are sometimes referred to are two pieces of sheepskin of equal length that are attached to the horse’s bridle and down the side of the horses head from ear to mouth.

Cheek pieces, similar to blinkers and visors reduce a horse’s range of vision and make the horse focus on what’s happening in front rather than by the horse’s side or rear. 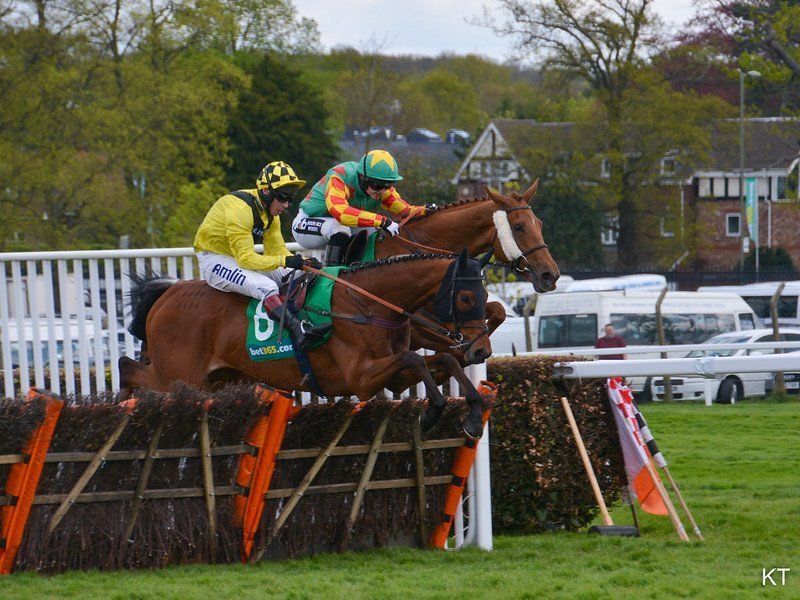 Eye covers are similar to blinkers but the eye-cups are replaced on one eye only with a non-transparent cover. Eye covers are a fairly rare sight on the racecourse, most often used when a racehorse is blind in one eye and it is used as protection for the damaged eye.

Eye shields are like blinkers but the eye-cups are replaced with a transparent mess over both eyes. They can be used as protection to the eyes on all-weather surfaces where the horses face kick-back as well as a tool to make a horse focus.

A tongue strap is used to tie down a horse’s tongue and stop the tongue impeding a horse’s breathing during racing.

Some horses race with their tongues out of their mouths, this can interfere with the horses breathing which in turn will stop the horse from running at its optimum. Typically this is a situation when a tongue strap would be fitted.

Earplugs are used on nervous or highly strung horses to block noises that can distract and upset them. Made from memory foam, the earplugs are placed in the horse’s ears and kept in place with a cord attached to the horse’s bridle.

Sheepskin nosebands are a fabric attached to the noseband that is employed on horses to improve their concentration, in particular on horses who have shown a high head carriage when racing. It encourages the horse to look down towards its nose/muzzle and therefore keeps the horses head carriage down.

All headgear, (except nosebands) that are intended to be worn in a race must be declared when at the final declaration stage. The headgear that has been declared must then be worn on the way to the start of the race and in the race itself. If not, then the horse will be withdrawn.

Earplugs – no denotation shown on racecards

Noseband – no denotation shown on racecards 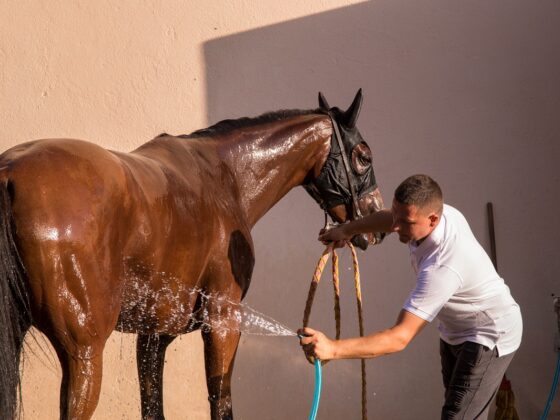 Why do racehorses sweat?