I’ve written quite a bit in the blog about the dosage index and using it as part of my horse racing analysis but, do I know if it’s effective at predicting a horse’s optimum trip?

So to test the dosage index and it’s accuracy as a tool in 2020 for British horse racing I’ve collated the data for the winners over a variety of trips for races since the millennium.

I chose a set of races over the range of distances regularly run on the flat in the UK, 5 furlongs up to 14 furlongs and plotted the dosage index for the winners of these races.

In this post, I’ll share my findings and thoughts on how you can use the dosage index to help find winners and improve your betting.

What is the dosage index?

Originating in the USA and developed in the early 1980s by Dr Steven Romans.

If you are new to the dosage index, here’s a brief explanation….

The higher the dosage index and centre of distribution figures, the shorter the predicted best distance for a horse.

Given its beginnings in America, where the race programme is more focused on speed than European races, how does the dosage index translate to UK horse racing?

In the UK, breeders are lured by the value and onward stud value of the middle distance prizes, the Derby and the Oaks being the holy grail for many.

So, how does the dosage index translate to British racing where the emphasis on races requiring stamina is much more prevalent – is it relevant in 2020 in the UK?

To test this, I’ve taken the dosage index and centre of distribution for the winners of a set of races over differing distances from the start of the millennium.

Initially, I chose the following races to cover the range of distances in UK Flat racing from 5 furlongs to 14 furlongs. For consistency, I chose Group 1 races across all distances to give me horses of a like for like class and ability.

Looking at the races I’ve selected to test, In theory, the dosage index and centre of distribution should be highest for the Nunthorpe over 5 furlongs and decrease as the race distance increases up to the St Leger over 14 furlongs.

So, what did the results show?

Looking at the overall profile of the results. The 5 furlongs of the Nunthorpe had the highest DI & CD of any distance and the St Leger over 14 furlongs had the lowest DI & CD.

This shows that while not linear, the DI & CD  decrease as the race distance increases, the key premise of the dosage index.

Note: I removed an outlier from the Nunthorpe data. The 2012 winner Ortensia had an extremely high dosage index figure 21.67. This one piece of data significantly skewed the 19-year dosage index average. Including Ortensia the average DI came in at 4.28, removing it lowered the average DI to 3.37.

Prior to starting the research for this post, my thoughts were that the graph would produce more linear results!

On the chart above, if you drew a straight line from the top of the blue bars – Nunthorpe to St Leger, then the averages from the other distances would be scattered around and nearer to this line. That’s not the case and this brings me onto sample size.

That a single piece of data  (Ortensia’s lofty dosage index) could significantly skew the overall average shows that the sample size of 19 is not sufficient to give a robust result. As I go through the results I can see this impact in some of the other numbers too.

While I would have got stronger results with more data, I also wanted to test the relevance of the dosage index to ‘modern-day’ racing.  Given its almost 40 years since it was first used in the USA, and I wanted to test its viability for today.

So, why the difference in 2 races over the same distance?

Special Duty who won the 1000 Guineas in 2010 stands out as an outlier with a DI of 6.0. Removing her from the group brings the 2 races closer together with the 1000 Guineas DI average falling to 1.66. Again, this shows the variability of using a relatively small data sample.

Combining the data from the 1000 & 2000 Guineas to give a bigger pool would seem sensible.

Another point to consider is that the Guineas are often a stepping stone for horses who go on to contest the Derby or the Oaks over 12 furlongs and who ultimately will prove best at middle distances.

We know from the overall dosage index results that a horse who stays 12 furlongs will have a DI & CD lower than a miler (on average), these types of horses winning the Guineas will lower the overall DI average for that race. There are a few examples of this type of horse in both the 1000 and 2000 Guineas.

Derby & Oaks winners in the Guineas

10 years later Camelot is another example of a Guineas winner that went on to prove his stamina and win a Derby over 1 ½ mile.

These types of horses, who are taking in the Guineas on the way to racing over further and their optimum distances are skewing the figures down.

On the back of this thought, I decided to pull the data for an older horse Group 1 mile race, the Queen Anne Stakes at Royal Ascot.

The thinking was, rather than be contested by some horses that are on their way to racing over further, the mature older horses who contest the Queen Anne are in general true milers. Would this give a better picture of the dosage index for a miler?

Considerably higher than both metrics for the 1000 and 2000 Guineas, individually and combined!

Two points to note here, the first I don’t know if I have the answer to!

Why are the dosage index results for the Queen Anne so much higher than the Guineas? Small sample size, variance or something else?

Thinking out loud but, does the physically immature younger horse require greater depths of stamina to stay ‘a distance’, the same distance as a fully mature older horse?

With this thought in mind, I decided to plot the data for the average dosage profiles without the 3-year-old only contests. This seems to give a better fit, more linear chart (see below). I don’t know, I need to test further but there seems some logic to that thought.

Secondly, for future race analysis, it is perfectly possible to win a Guinea’s with a horse bred to stay the Derby or the Oaks distance. While the 1-mile test of a Guineas may not be the horse’s optimum distance, ability and superiority over immature rivals can be enough to prevail.

Moving on to 10 furlongs and the Coral Eclipse. The first thing to say is that the average DI 1.95 CD 0.38 are both higher than Guinea’s averages and Guineas combined averages.

This backs up the previous point that the Queen Anne data may be more representative and that the Guineas averages are brought down by horses passing through to longer trips.

The Eclipse over 10 furlongs, comparative to the Queen Anne over 8 furlongs makes more sense. Though the Eclipse number looks to be pushed up by 3 of the 19 in the sample. Giants Causeway DI 4.85, Medicean DI 3.67 and Notnowcato DI 4.14 look relative outliers in the sample,

Finally, the middle distance races, the Derby, King George and then the St Leger.

There are differences in the averages between the two 12 furlong races,  though less variance than seen for the races over 1 mile.

What is noticeable is the pronounced drop in the DI & CD averages once a horse is racing over 12 furlongs plus.

This seems quite significant and information that could be incorporated into a forward focusing selection process.

From the backtested data, horses with middle distance dosage profiles seem the most significant.

How can you use this information as part of your analysis and selection process?

When you look at a horses career on the racecourse, not many horses start out over what will ultimately prove to be their optimum racing distance. Typically they will start their racecourse education over shorter distances. A trainer may give them several runs before stepping them up in trip.

Finding a horse with a DI in the 1.00 and CD 0.06 range who has been running over a distance significantly short of 12 furlongs, it’s reasonable to expect improvement when they are stepped up to the trip they have been bred for.

Apply this to lightly raced horses coming into their 3-year-old career and you can identify horses who are likely to find significant improvement.

Similarly, there is often lots of speculation around the big race ante-post markets, the Derby being a prime example. There will be lots of talk over the winter and after the close of the horses 2-year-old season about whether they will ‘stay’ the Derby trip? Using the dosage index can give you a starting point for forming opinions.

I’ll finish this post with this. You can use this link to the excellent free to use site Pedigree Query to check out some dosage indexes for yourselves.

The current front 4 in the betting for the Epsom Derby are Pinatubo, Mogul, Kameko and Waldkonig. Forgetting ability for now, what are the prospects of these 4 horses proving best at the 12 furlong Derby trip? 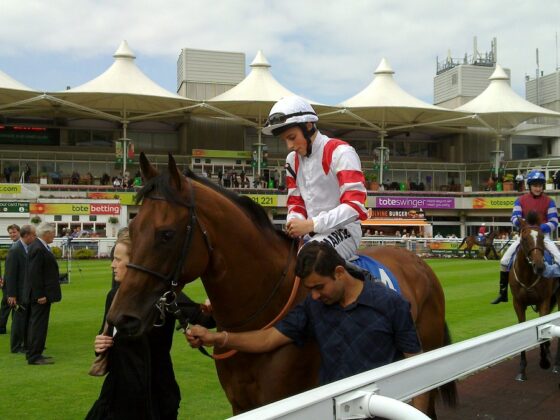