Times from Haydock’s card on Friday back up the official going description of soft ground and focussing on proven soft ground horses offers a starting angle when looking at Saturday’s card.

William Bligh is one of the more tried runners in this field and has posted the best form prior to this race.

He’s a soft ground winner, that’s a positive for his chances and at a current best price of 10/1 he looks overpriced. I see him more of a 6/1 chance and he appeals as an each-way prospect here.

Whether one of the other more lightly raced types improves past him is worth considering. The one who appeals most is the William Haggas trained Alenquer.

Alenquer has seen the racecourse just once. Winning at Newbury on good to soft ground in a time that means he needs to improve around 3 lengths to match that already achieved by William Bligh.

How likely is that?

William Haggas horses improve on average 6.6 lbs from debut to the second run.  That average improvement would be enough to put Alenquer on a par with the best past form here. Encouragement can be taken from his Newbury debut that Alenquer could improve more than the average Haggas horse. Slowly away, he travelled well through the race in a run style that suggested he looked in need of the racecourse education.

Further encouragement can be taken from Alenquer’s pedigree, a dosage profile of DI 0.64 CD (0.11) is that of a (fully mature) middle-distance horse. He looks sure to benefit from the step up to 1 mile here.

A current 9/4 chance, that might not seem big, but I think there’s a little value in the price. I have him as the most likely winner and while Fancy Man is the current favourite at around 11/8 I can see them going off much closer come the off. 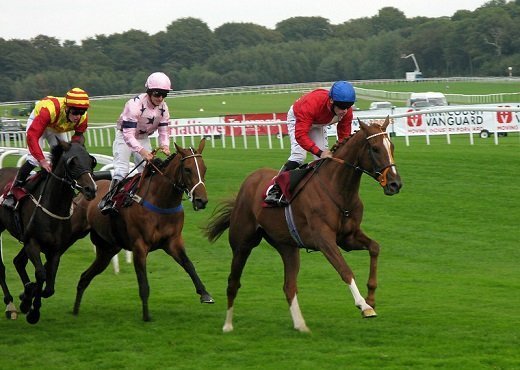 Dreams to take the Haydock feature

This race revolves around Khaloosy, if he turns up in the form he showed at Royal Ascot then he wins this and he wins it well.

The problem is, he’s run since Ascot, at Goodwood and ran an awful race. If you’re backing him to win here then you need to put your trust that Roger Varian has him back and ready to run to his best.

Looking for reasons why he ran below form at Goodwood.

A 5 runner race run at an inefficient pace distribution? Quicker ground than he encountered at Ascot? Possibly.

Whatever the reason, does the price compensate for the uncertainty?

If Khaloosy was coming here straight off the back of Royal Ascot win, he’d be an odds-on chance here. He’s a best priced 2/1 on Friday evening, 9/4 on the exchanges.

That’s the sort of bet I want to be making, taking 9/4 about an odds on chance so I’m happy to play.

He’ll be popular with the Saturday betting public on the recollection of his impressive Ascot display. Should confidence also come from the Varian stable I can see Khaloosy going off a lot shorter than the current best priced 9/4.

The market on Friday evening doesn’t agree with that assessment and Top Rank looks over priced.  Fourth favourite in the current shows and 8.4 on the Exchanges, There’s back to lay opportunities in that price and should Khaloosy fail to produce then he looks the one most likely to benefit.

If Dark Jedi proves as good at 14 furlongs as he has at 12 furlongs then his price here is well out of line. I have him as the most likely winner here and make him around a 7/1 chance.

Two horses stand out here, I prefer the very consistent and progressive Arthurian Fable over Al Dabraan and at a current best price of 3/1 he appeals as offering a little value. I have him a 9/4 shot and Al Dabraan an 11/4 chance.

Favourite Moon is the current market leader and one I want to oppose at 15/8. That’s too short on what he’s achieved versus Arthurian Fable and Al Dabraan.

Arthurian Fable for me.

As you’d expect this is a good race and an ultra-competitive one, that said there are two that strongly take the eye here and appeal as well overpriced.

The time of his York second last time out gives him a serious chance here. Dark Jedi is still improving, at his best on soft ground, the one question mark is whether he can reproduce his York run up a further 2 furlongs in trip?

Worth noting that he posted a personal best when stepping up to 12 furlongs for the first time at York on his latest run. A little concerning was that he travelled strongly into the finishing stages, before being outbattled by the winner. Was he outstayed?

If Dark Jedi proves as good at 14 furlongs as he has at 12 furlongs then his price here is well out of line. I have him as the most likely winner here and make him around a 7/1 chance. As I write he’s available at 22/1 with Hills and 26.0 on the Exchanges.

I make him a solid proposition at these prices.

I’m not averse to backing two horses in the same race, I know many frown on it but if you approach a race from the perspective of securing value, a price you assess as bigger than the true chance of the outcome then it’s a profitable angle.

That leads me into my second selection here, Indianapolis. He’s a regular in these high-class middle-distance handicaps and regularly runs well.

Indianapolis has several time performances in the book that put him right in the mix here. His best-ever effort was achieved in heavy conditions and he comes here having proved his fitness and well being after a good recent run at York.

Her third at Ascot in the Group 1 Champion Sprint Stakes on her final run last season is the best time performance on offer here. A reproduction of that effort and she has the beating of everything in Saturday’s field.

This makes appeal as a decent betting heat.

The two 3-year-olds are the wrong prices here. Much as I’ve been a fan of Art Power since last season and thought this might prove to be his ideal target, he’s far too short in the betting at 11/2. He was exposed at York on his latest run and doesn’t at this stage look good enough to win this.

Golden Horde, nothing against the horse but, I’ve never been a fan or wanted him onside, purely because he’s often over bet. He needs to find considerable improvement to take this on ground he’s unproven on. I’m not interested in him at the current 15/2.

Taking this view on the third and fourth favourite and I start to have a race that is shaping up as an interesting betting proposition.

Onto the favourite Dream Of Dreams, he looks to be the right price. Visually he was mighty impressive when winning at Newbury last time out, though the time of the race didn’t verify the visual impression of a top-class performance. That was over 7 furlongs on dead ground, whether he can reproduce that over 6 furlongs on the softer ground are questions he has to answer? I’m happy to pass Dream Of Dreams over at 7/2.

Brando has back form that entitles him to be involved. He gets his optimum conditions but, as an 8-year-old he’s been on the decline in his 4 outings this season.

Last seasons winner Hello Youmzain looks very solid here, optimum conditions and form that entitles him to be in the mix. 7/2 looks slightly too big. While I respect his chances, there’s one that I must be with at a big price.

Her third at Ascot in the Group 1 Champion Sprint Stakes on her final run last season is the best time performance on offer here. A reproduction of that effort and she has the beating of everything in Saturday’s field.

In 4 outings this season, Forever In Dreams has run below her Ascot best, so you need to be willing to forgive her those efforts. I’m happy to do that, tomorrow will be the first time she’s had a chance to race on testing ground since the Ascot Champion Sprint (run on heavy ground).

I have her chances in single figures, that makes Forever In Dreams a strong bet for me at the prices.